On to the second of my Avengers team (or third I guess, as we've already got Iron Man further below)

Heres Captain America, updated with his Avengers uniform, which is actually a lot more complicated and detailed than it at first seemed. I actually had really mixed feelings about the hood from all the stills we were seeing, but after watching the film, it really doesn't stand out or look as funny as it did it pitctures.


Despite sharing the same body model, the whole figure has been redesigned. He even comes with two different heads, one with the mask and one without. 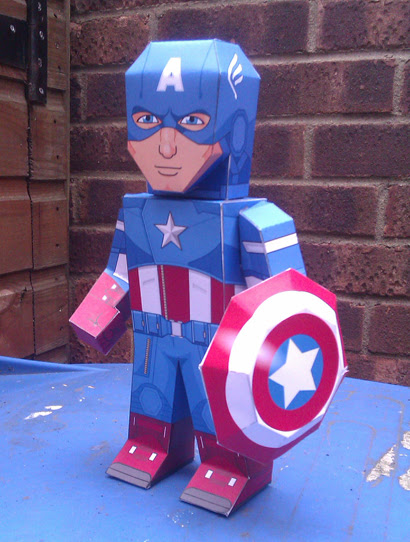 I'd thought about doing a removable helmet on him like Iron Man and.. err.. another model to be released ;) ... but I like the whole side parting  he's got going on. 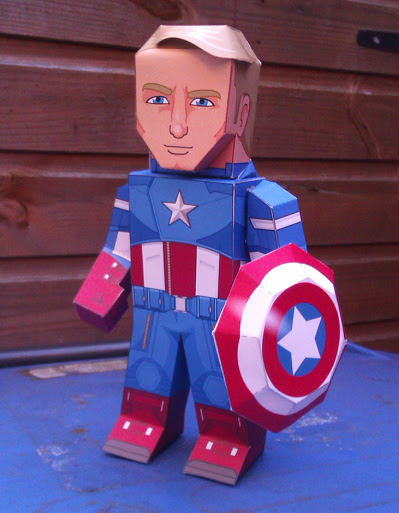 LOVE IT! looks a little bit like owen wilson though lol

Thanks for your design!
I shared this papercraft at my collection blog: http://www.papercraftsquare.com/marvel-avengers-captain-america-free-paper-craft-download.html

LOL I know what you mean about the Owen Wilson part a bit.

I've just updated the pictures with one with his mask on so you can all see what that looks like too!

Huge thanks for these - they will cheer up my other half no end.

Great - thanks! Can't wait to make it with my kids!

Wonderful, i love this, will be doing this with the kids, i've added a link on my site to it it would look excellent as a party center piece or a good activity as a party game ive put your link here Avengers Party

I have been building all of your characters but I was wondering if you could make a Superman, Spider man, green lantern and if it's not too much trouble a Harry Potter with hormione, Ron, Malfoy, voldemort, dumbelldore, AND A BIG HAGRID.

I'm just wondering what paper you use to print...I absolutely love this

for some reason i can't figure out how to make the head portion... "/ HELPPP!!! I was able to figure out everything else except for the head..

Put a venom venom but aja aja war is itself

anyway to get these in black and white outline so kids can color them in?

Can you make ant man and Spiderman