So, as you may have noticed, it isn't Nightcrawler. I am still working on him, but I want the body to be perfect before I realease him and im still not digging him entirely. 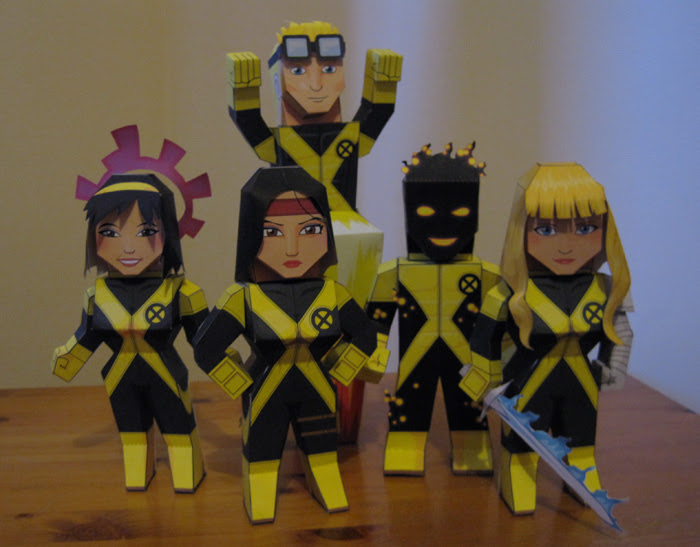 Cannonball
First up I thought I'd do a variant of Cannonball in his current New Mutants costume to go with the rest of the team. Arms can be positioned up or down as you choose. The flame effect that was in the previous release is in the file, despite not being on all the promo images. 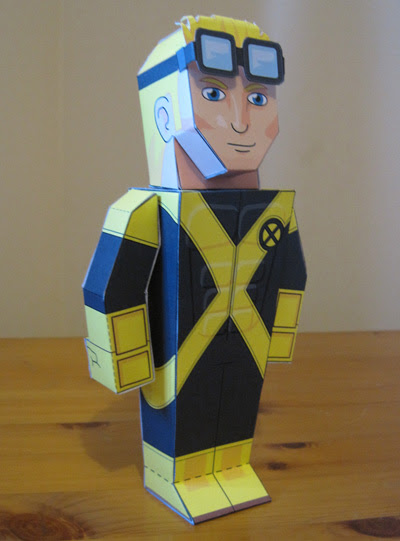 Moonstar
Moonstar turned out pretty well. Quite a basic figure. though the hair may seem complicated, it's just the same as Jean/psylockes etc.
The dagger might be a bit fiddly but shouldn't be anything too bad. 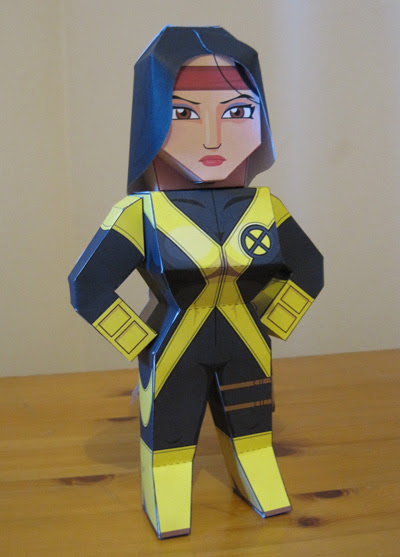 Karma
I'm actually really disapointed with how all the photos of Karma turned out. They really don't do the model justice, it looks a lot better in person. Her face probably took the most effort in this model as I was trying to give some characters more distinc ethnicities than any of my other models have. 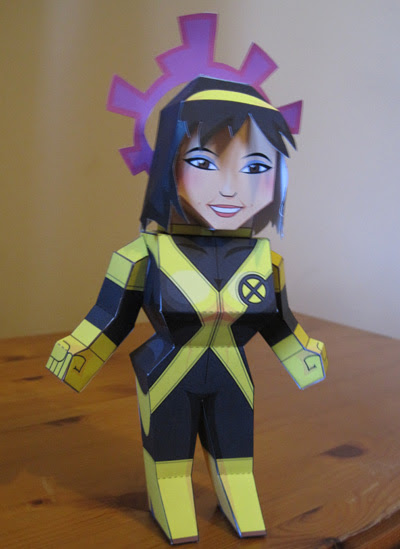 Sunspot
Despite the effects used, this should be a very basic figure. It's a bit of a cheap one from me, using different body parts to create a new model (Look at me, I'm Toy-Biz) but I think the whole model comes together on its own. 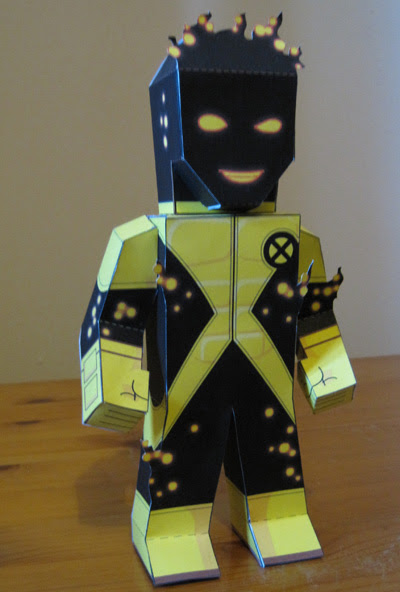 Magik
I have to warn you with this one. It does get DAMN tricky with her arm+Sword. As always, I've tried to make it clear in instructions but if you have any other problems I can try posting more information to clarify anything.
All in all the sword turned out A LOT better than I thought it would so I'm pretty proud of her :) 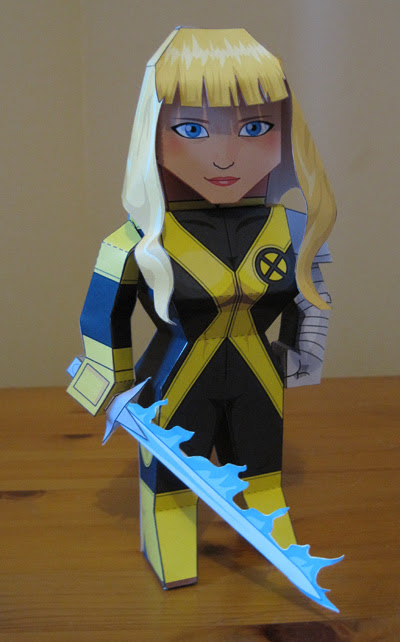 There's my team so far. I know there are a few more, ie Doug, Warlock and Wallpapergirl... i mean Magma sorry... but they will all have to wait. Have a few other models on my mind now... hopefully I'll actually get some time to do them. 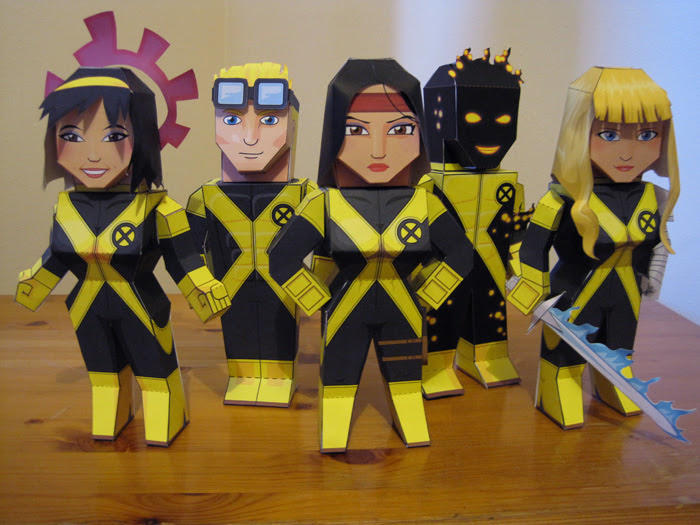 Hope you all enjoy them as much as my other models.

Ps. Nearly half the people visiting my site are from France. I'm curious where you're all hearing about the site from?

Final note : Even moreso than usual, on the first few days after I've uploaded the videos I get a lot more traffic than my internet host is meant to have so if you have problems downloading files, clear your Cache and then try again later.
Posted by Xavier Gale-Sides at 16:13

dammit none of the downloads r working 4 me :(

Five new ones? You've really outdone yourself! Karma is my favorite, I think. Can't wait to see your other paperheroey projects!

how do you make these, i want to do my own line of monster high paper dolls

yes, i have become quite curious as well how do u make these fine pieces of art?

Your models ROCK! They must be made of pure AWSOME!

I'm sure you get billions of requests so i'm not gonna request any MPH's but just seed an idea.... Fantastic 4 MPH's would be AMAZING!!!....... Just seeding an idea ;)

Alright you got me I'm from France ^^. I don't remember how I got here in the first place, but I was looking for Marvel paper crafts, so I guess this page came out pretty fast, probably from a papercraft website.

Anyway, these are all awesome ! Can't say which NM is my fav, the heads of Karma and Dany looks perfect, the effect on Sunspot too, and the blade of Illyana - Woah. I'm gonna have to do them all ! Too bad I just started Emma.

No in fact I just remembered, a facebook friend of mine posted a link to this page. He found this art really cool while not being an X-men fan like I am. I'm glad he did ;-)

Hey Xavier,
this is the same person who made the dark and white phoenix. they r coming along not very smoothly but i will do the best i can and i am just letting u know that i am making an X-Force Wolverine. He is coming along and i will send u pics and the designs!

Please tell me you are working towards possible amazing spiderman characters. Between spidey's variant costumes and the villains he has come across over the years I'm sure would look spectacular with your skills!

is nightcrawler comming out soon?. any other thoughts of the second wave of xmen like banshee or dark and white phoenix and x-23 and the rest of xforce and stuff? just thoughts.
Keep up the good work :D

these are awesome, but what happened to the best new mutant? magma! lol shes my fave.

Hello Xavier great stuff as usual, just a little nitpick, Magik is one of the few left-handed characters in comics, so her soulsword should actually be in here left armored hand.

LoL@Telmo.
I knew that Magik was left handed.. she's just chosen to hold her sword in her right hand.. err.. to free up her left hand for playing tennis :)
Worryingly I actually used a lot of source material from Marvel and in that the sword kept swapping hands so wasn't sure which hand to put it in at the time.

@David and Cheryl.
Yep I'l get round to Spidey and his villains eventually. I've actually just finished designing a larger body base that could be used for a Venom and/or Sabretooth.

Really want to get around to an X-23 as well but will need to design a different body for her too, as think the current female body is too "womanly" for some of the younger characters like her.

Shadowcat I will get to just not quite yet. Just been working on some more... random.. things for my next couple of releases.

Tempted to make a Youtube video of a walkthrough making a character start to finish to help people making them. Would anyone find this useful?

THANKS FOR THE FEEDBACK. I think the video would be EXTREMELY useful. and could you tell us what the 'random' characters are?

Don't like to say incase they take longer than expected and I release others first (I'm looking at you, half-made Nightcrawler)

but what I will say is that they're not comic related, and if I get the whole set of 4 done they should be awesome.

(no not the ninja turtles, they were a comic first :P)

i thinkthe video will help me with Storm, i have tryed 2 make her ever since u made her and i am stuck

A video would be extremely helpful. I've tried Magik twice now (my first two attempts at making these) and I cannot for the life of me figure out how to get the tape to stick when creating the body. Seeing a step by step would help a LOT to see which parts should be put together first and how the head is put together correctly.
But still, it is awesome to work on and it pleases me that someone took the time to even think these things up!!!!

WEll I need to make a couple of the models up for my LCS over the next few weeks so will try and record/edit myself making them :)

Think I need to do much better tutorials.. especially as a lot of the instructions of my newer models seem to be assuming you've made some of the others before.

please make a vid. it would be extremely helpful

could u tell us if/when u r planning on making a tut vid?

Wow! You are seriously amazing!
I would love to see one of wallpapergirl aka Magma!

I hope you also do a Kitty Pryde too!

I think you need commas to separate the tags (labels) so that they work? At the moment it's just one big tag for me.

Really good! Where is the paper cheapest to get for these(I had to learn the hard way not to use printer paper)?
Can't wait to see night crawler! Keep up the good work! :)
PS if your out of ideas try this one: Thor.